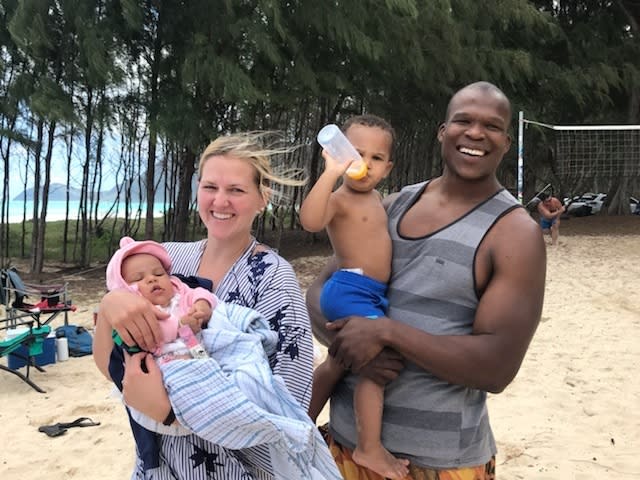 HONOLULU (AP) — Doorbell camera video obtained and made public by lawyers representing the family of a man fatally shot two months ago by Honolulu police provides more information about the events that unfolded before the deadly encounter with officers.

The footage shows that he arrived at a house, took off his shoes, entered the home and then quickly left after his presence confused the occupants. He repeatedly apologized.

After police killed Lindani Myeni in April, his widow filed a wrongful death lawsuit alleging officers were motivated by racial discrimination because her unarmed South African husband was Black.

The shooting happened three months after Lindani and Lindsay Myeni moved to Hawaii, where she grew up. The couple believed Hawaii’s diversity would make it the safest U.S. state to raise their two Black children, she said.

After the April 14 shooting, police said Lindani Myeni’s strange behavior frightened the occupants and that he violently attacked responding police officers, leaving one hospitalized with a concussion.

Police later released short clips of body camera footage, showing him ignoring commands to get on the ground outside the house he entered, a stun gun fired by police either malfunctioning or having no effect on him. The police video showed that an officer fired several gunshots before saying, “Police!”

Police and city officials didn’t immediately respond to a request for comment Tuesday after the widow’s lawyers released the video. Now-retired chief Susan Ballard previously said that Myeni’s race wasn’t a factor in the fatal shooting.

A statement from the lawyers who released the video said Honolulu police “tried to convince the public that this was a burglary and that Lindani Myeni was acting erratically; but the doorbell video we have now obtained from the owner shows that HPD knew all along these stories were untrue.”

The statement added: “We have also compelled the City to turn over unredacted body cam footage in its original format, producing much better quality audio and images than the version that HPD played for the press on April 16, 2021.”

The doorbell footage shows that Myeni arrived at the house soon after a couple entered the home that night. According to depositions in the lawsuit, the man and woman were tourists staying in the multi-unit dwelling, the lawyers said.

The footage shows Myeni walking into the home, wearing a face mask and his umqhele, a traditional Zulu headband.

He is later seen standing outside the house, his phone and headband in his left hand.

According to the lawyers, the woman in the home pretended to make a phone call while Myeni was outside saying someone had broken into her home.

She then called 911 and told an operator about the man and and that he had no weapons in his hands.

Myeni is heard in the video outside the home saying repeatedly, “I’m sorry.” He puts his shoes on and leaves, the footage shows.

Meanwhile, the couple’s voices recorded on the video make it sound like they are still on phone calls. The man tells someone calmly that Myeni apologized and left. The woman, still on with 911, sounds upset.

When police arrive, she is heard yelling, “That’s him!”

“Get on the ground now,” one officer is heard saying.

“Who are you?” Myeni responds.

He would not have known the people shining bright lights in his eyes were police, the family’s lawsuit said. He likely mistook the house for a similar looking dwelling that houses a temple next door that’s open to the public, the lawsuit said.

The footage, along with a recording of the 911 call previously released by police, is posted on YouTube by Justice for Lindani Myeni.

The lawyers said they were still evaluating full, unredacted body camera footage for the period after the shooting.