Mere hours after an embarrassing press conference, President Donald Trump’s attorney Rudy Giuliani suggested that someone should “cut the head off” Democratic leaders.

Speaking to Fox News host Sean Hannity, Giuliani used a throat-slitting gesture after making baseless claims about the electoral process, including a conspiracy that a German company coordinated with the Biden campaign to “come up” with votes.

“Somebody’s gotta cut the head off,” Giuliani said as he made the gesture on the show, aired Thursday night.

His comments during the segment bear a resemblance to the falsehoods he made during the press briefing Thursday, which was held at the Republican National Committee headquarters on Capitol Hill. Throughout, he alleged he had evidence of “voter fraud” despite not having proof.

The press briefing went viral, in large part due to an apparent mishap in which Giuliani’s hair dye leeched off his scalp.

A day after the conference, his son and a Trump staffer, Andrew Giuliani, tested positive for COVID-19.

Giuliani says “the Democrat Party was hijacked by Clinton,” then adds while making a throat-slashing motion, “somebody has gotta cut the head off” pic.twitter.com/FxU5PFePAw

Giuliani added: “Somehow the Democrat party was hijacked by Clinton and since then it’s gone more corrupt.”

Soon after, Hannity cut Giuliani off mid-sentence — and quickly apologized: “I’m not trying to cut you off.”

This article originally appeared on USA TODAY: Giuliani to Fox’s Hannity: Someone should ‘cut the head off’ Democrats 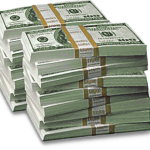